Cats, Google and the pleasure to be found in a worldwide computer meltdown

I’m guessing that anyone remotely interested in Psychology would have had to be living in a box with Schrödinger’s cat, to have missed out on Behavioural Modification theory. Specifically Operant Conditioning, a term coined by B. F. Skinner in his seminal work: The Behavior of Organisms 1938.

It was one of the first things I covered when I was studying A level Psychology in the 1980’s. At the time we had a lovely Siamese cat called Ming. I mention Ming, only because after discovering the joys of Behaviourism, it wasn’t long before the ethics committee at home (my Mother) gave me permission to operantly condition the cat.

Every time I fed her, we’d ring a musical triangle that was hanging in the kitchen. And what do you know? – B.F. Skinners results were replicated in our home. Before long, every time we rang the triangle, Ming would appear from nowhere, as if we’d summoned a genie. Manifest proof of the awesome power of A level Psychology and Operant Conditioning. 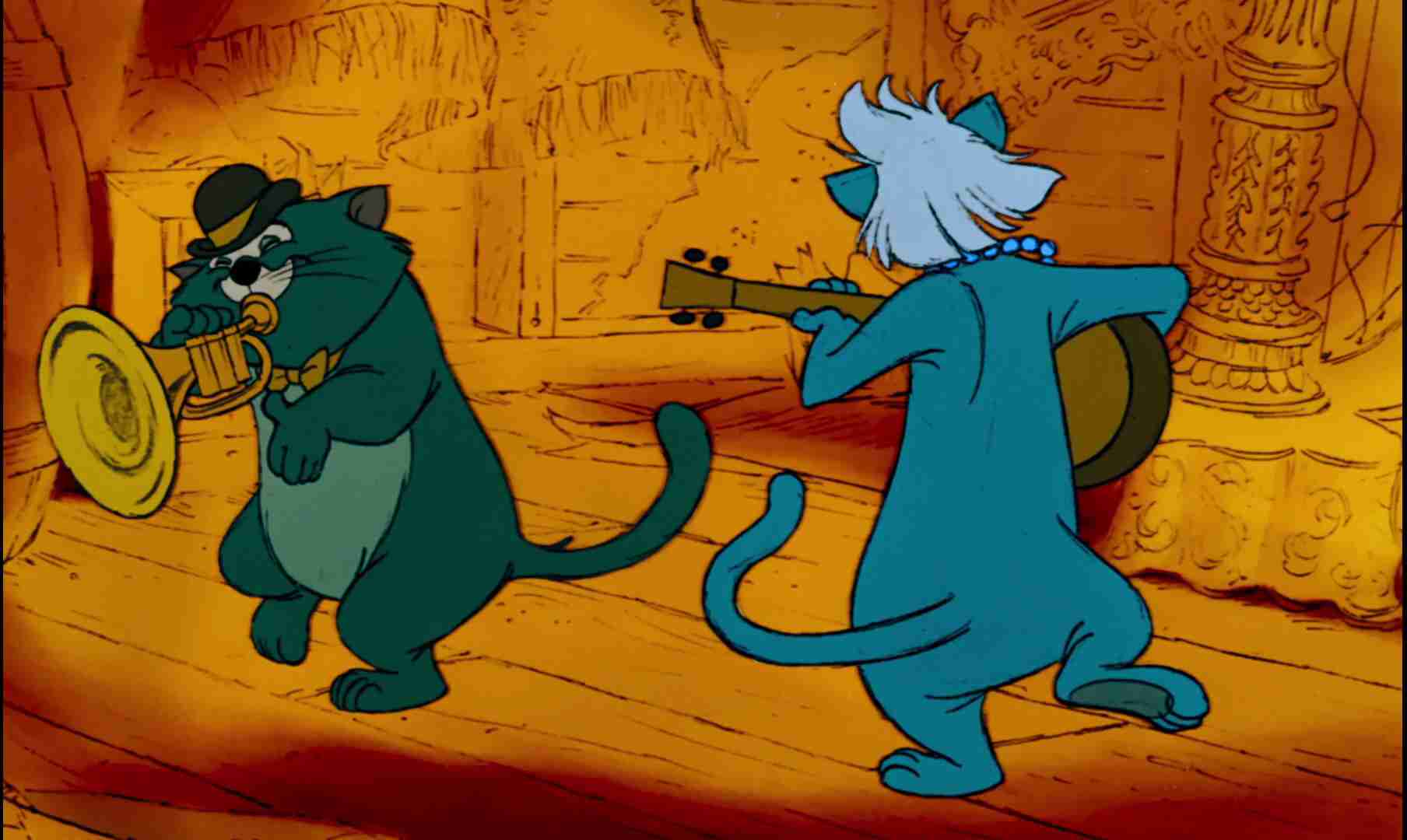 However, I noticed something unsettling start to happen. After a week or two, every time Ming was hungry, and she found her bowl empty, she would simply tap the triangle with her paw; and my mother would come running into the kitchen and feed her. Honestly, the cat was parsimoniously using Skinners techniques to condition my Mother to feed it on demand. 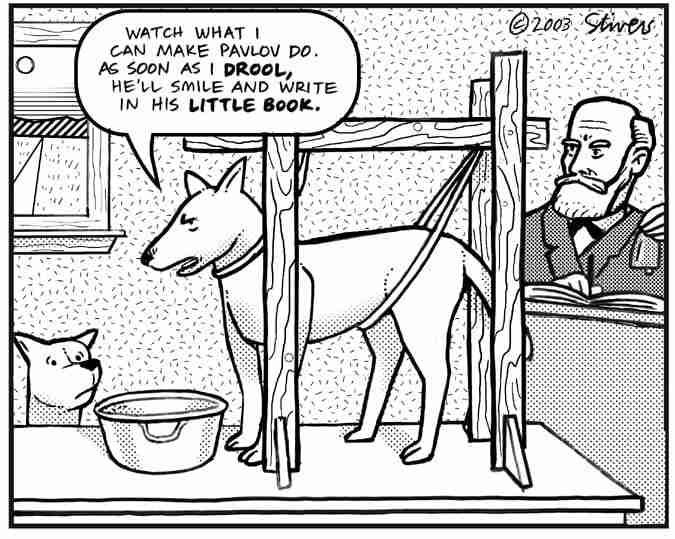 This abiding memory of Ming and her training of my Mother, was as good a starting point for this Blog as I could imagine.

So I went and visited Google in order to generally mooch around the subjects of cat food, conditioning and Mothers, to see if I could form any bridges to Consumer Psychology.

Then it suddenly occurred to me that I was in a Skinner Box constructed (probably accidentally) by Google. 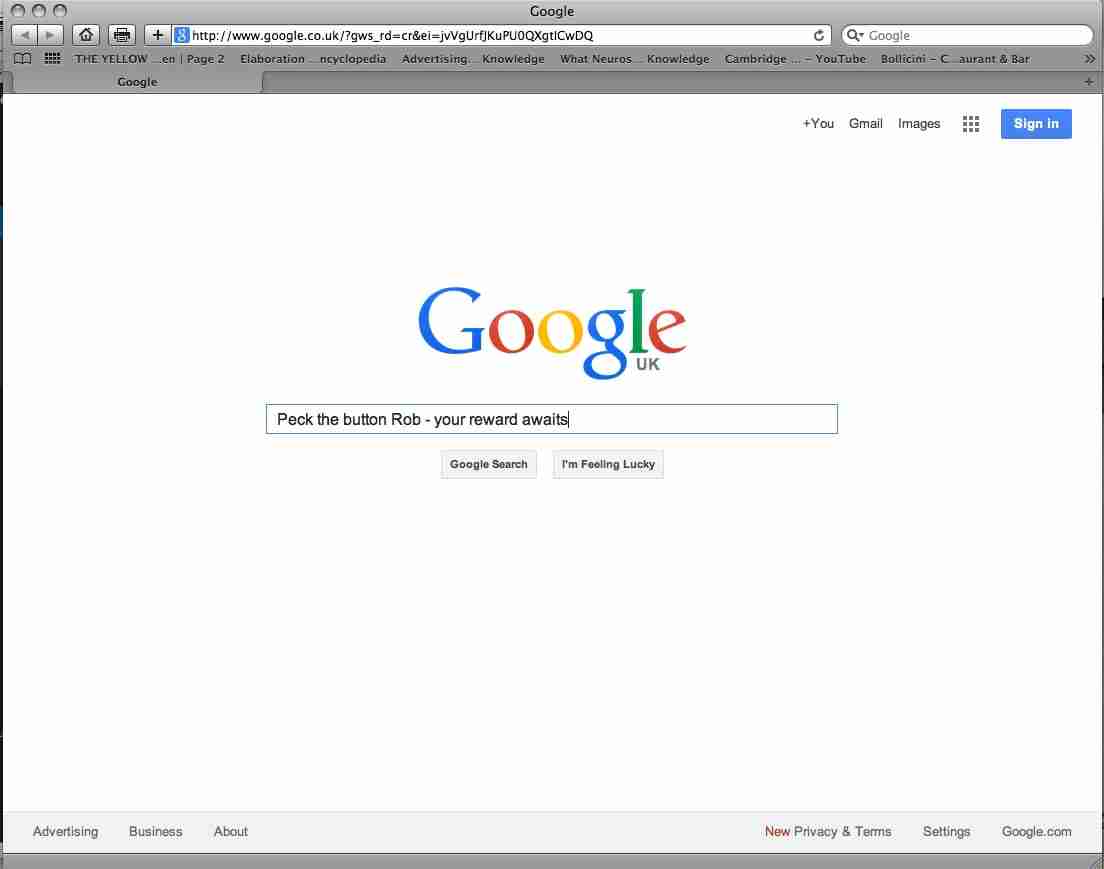 I key in what I’m motivated to know, then I peck that lovely little “Google Search” button and I’m rewarded with the continuous reinforcement usually only scheduled during the initial stages of learning, in order to develop very strong associations between behaviour and response.

And there doesn’t seem to be any form of negative enforcement. Because if Google’s answer wasn’t what I was looking for, I simply blame myself for not defining my search correctly and start my self administered operant conditioning session all over again.

Do I love Google though? Or at the very least, have a little identification and loyalty to it? The short answer is: “No!”

There’s no sense in which I would think of myself as a Google advocate. I just use it over other search engines – possibly through conditioning, lack of motivation to try anything else, or because it’s not something that has any brand attributes I can self identify with. In fact, without Googling ‘Google’, I’m not even that sure what they stand for as a company. Incidentally, don’t worry about Googling ‘Google’ – it doesn’t break the internet.

So it would seem that my loyalty isn’t reliant on operant conditioning – but does a form of self-conditioning embed brand loyalty and breed brand champions?

I have already talked about our evolutionary need to belong, in my previous Blog, so won’t repeat it here. But given that there is a deep rooted need to belong and identify with a group (or brand), what happens to us once we’ve made the emotional and cognitive commitment?

For me Apple Macintosh is such a brand. I’m totally brand loyal to Apple, to the point of my delight in the failures of other competitor brands. And I greet competitor success with either disbelief or complete and utter apathy. 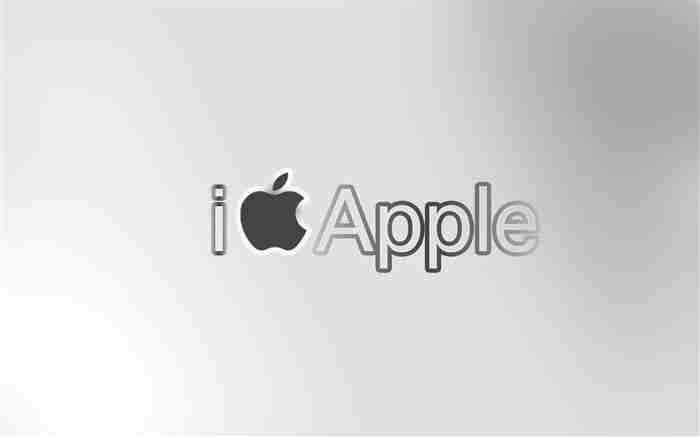 I believe in Apple. The day Apple brought out the iPhone, I dropped my Nokia like the hot brick that I perceived it to be and ran toward the shiny world of Apple and all that it had delivered to, and conditioned me with, in the past.

Now when I see someone using a Samsung, or an other non Apple device, I actually feel sorry for them, because of their use of inferior (in my opinion) brands. In fact, I have what is probably a bit of Schadenfreude (a German term denoting pleasure felt in response to another’s misfortune), as I genuinely believe that they are suffering a little with their inferior product. It doesn’t matter if it’s true or not, it’s what I believe.

It’s not just me though, Thomas Hickman & James Ward (2007) explored the effect of inter-group stereotyping on emotions toward the rival brand, and particularly the emotion of “Schadenfreude”. Their study is a fascinating examination of the relationships among identification with a brand community, negative stereotyping of rival users that lead to the propensity of “trash talk,” and feelings of Schadenfreude.

So this got me thinking. Could that little wave of Schadenfreude type pleasure I feel, actually be me operantly conditioning myself to prefer Apple? My own experiences of Schadenfreude could be acting as a form of positive reinforcement of my own beliefs. The more I experience it, the more I establish my belief in my associated group or, in this case, brand.

Even as I write this, I’m smiling. I’m not angry. I’m not scared that I’m being manipulated from a little dark room in Cupertino, California. I’m just happy, because the brand Apple makes me happy.

And best of all, Apple join in too. Remember when we all thought that the planet was going to explode at the turn of the Century, due to perceived problems with PCs moving from the year 1999 to 2000? Apple seized the opportunity to get involved in a bit of Schadenfreude (in the form of trash-talk) of their own. Producing this brand advert, which has the honour of being my favourite of all time:

Henri Tajfel, an influential academic in social identification theory, defined it as ‘the individual’s knowledge that he belongs to certain social groups together with some emotional and value significance to him of the group membership,’ (Tajfel 1972, p. 292 as cited in Hogg and Terry 2000).

So when I become brand loyal to Apple, Taifel would argue that I’ve adopted a social identity and that, as such, I am motivated to think of myself as positively distinct from other groups (or brands), even to the extent that I view the possession of another brand (say a Samsung phone) as something to be pitied.

More interestingly Hogg and Terry (2000) suggest that this develops into the consumer having a natural tendency to seek out information that positively discriminates his or her own brand community from others. In my case I didn’t just seek this positive information out, I virally pushed it to everyone I knew at the time.

Something that car manufacturers are especially focused upon, this seeking out of information that confirms their existing customers have made the right decision. Did you know the car in front was a Toyota?

Skinner, B. F. 1938 The behavior of organisms: an experimental analysis.